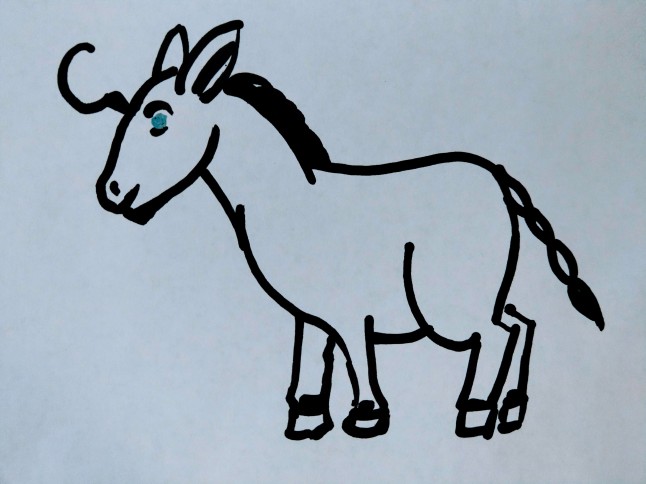 A Nunicorn  – not a horse with a horn, a donkey with a hook!

(a story for children of all ages)

The myth about fairies and unicorns, Nobby thought to himself, was that they weren’t all nice and noble. He plodded his way along the dirt track, his heavy hooves leaving deep imprints in the mud. Earlier a pair of unicorns had galloped by, seeming to float over the ground and looking magnificent of course. They didn’t notice the thick clods they threw up into Nobby’s face. Nobby was a nunicorn and no one cared what he thought.

The cart creaked and swayed behind him. At least that did not weigh much. He was meant to have a load of bright red apples from the orchard, but instead he had a barrel of seashells. Pippin the apple fairy had promised to transform them for him on the outskirts of the fairy village.

Everyone thought fairies only drank nectar straight from flowers, and unicorns munched grass in unspoilt forest glades, but they all loved apples and someone had to haul them in. Pippin remembered what it was like to be an outcast and quietly helped Nobby in his thankless duty. They had to keep it a secret though because the magic people were still a bit scared of Pippin’s ability to turn anything she touched into an apple. Fortunately, while the fairies and unicorns were graceful and lovely they weren’t very bright, and so far Nobby had never been caught.

It was a long trudge from the seashore and Nobby was covered in sweat by the time he reached the meeting point with Pippin. She was nowhere to the seen. With a sigh, Nobby dipped his head and let the thick rope attached to the cart slip off the hook that protruded from his forehead.

“Ho Nobmeister!” A unicorn appeared in a sudden cloud of road dust, rearing up magnificently on his hind legs. It was Fidelio. The unicorn nosed his way to the cart, trying to nudge aside the canvas covering the barrel.

“Give us an apple,” he said. Most people who love unicorns don’t know they can speak, which is just as well because they are not very well spoken.

“Can’t,” Nobby replied, truthfully. It was impossible to lie to a unicorn.

“Why the flippin’ ‘eck not?” Fidelio snorted and pranced back a few steps.

Nobby desperately thought of an excuse. Where was Pippin, she had promised to be here?

“They’re not quite ready yet,” he said. It wasn’t precisely a lie, and Fidelio did not seem to notice.

“Want one.” Fidelio nosed towards the barrel again.

“It’s your choice of course,” Nobby said with a shrug, “but if you eat those I think you’ll get a terribly upset tummy.” He looked meaningfully at Fidelio’s bushy silver tail. “I’m not sure you could lift that high enough to keep it clean.”

Unicorns are also terribly vain. Fidelio backed away and Nobby breathed a sigh of relief.

Pippin was leaning on the cart and held out an apple to Fidelio in one gloved hand. Her other hand was hidden behind her back.

“Yeah, Nobbo. Exaggerating.” If Fidelio wanted to complain more his words were lost in a sudden mouthful of apple. He pranced off with a shake of his magnificent mane.

“That was close.” Nobby twisted to give Pippin a nuzzle and she offered him an apple. As always it was juicy and crunchy and sweet.

“Sorry Nobby, there was a terrible storm last night and it has made travel really difficult.” Pippin flapped water from her wings and lifted a muddy shoe.

“Tell me about it, I’ve been slogging through this sticky muck all morning.”

“Oh Nobby,” Pippin said, scratching the base of his hook, “things will get better for you one day, I’m sure.”

Nobby dropped his head, Pippin was one of the few fairies that was kind to him. The others had no time for someone who looked as odd as he did. If something wasn’t lovely and pretty and nice the fairies had trouble accepting it. They assumed that anything outside their narrow view of what was beautiful must be either evil or pitied. The unicorns were just mean. A nunicorn, they said, wasn’t even a thing, it was a mistake. Everyone knew there were mundane horses and donkeys, and stupendous horses with a magic horn called unicorns. There were even legends of an exceptional horse with two magic horns called a bicorn, but no one had seen one of those. Then they looked at Nobby. Whoever heard of a donkey with a hook? they said. That is exactly what Nobby was.

“I’ve got an idea!” Pippin said, grabbing Nobby’s gristly mane in excitement. “If you could do something really brave, or really spectacular everyone would have to change the way they think about you.”

Nobby shook his head and took a couple of steps backwards. Pippin could get over excited and if she touched him with an ungloved hand she would turn him into an apple.

“I don’t know, maybe you could save someone in danger, or find something no one else could.”

“Like the bicorn?” Nobby snorted, “no that can’t be right. Why should I have to do something special to be treated with basic respect. What you’re saying is that because I am different I have to work harder than everyone else. Why is that fair?”

Pippin sighed. “I think you’re expecting the world to be fair, and it isn’t.”

Nobby regretted his outburst. The fairies had been unkind to Pippin and were still not welcoming. But he still felt angry. He and Pippin were as they were and fairies and unicorns should just accept it. He dipped his head and picked up the strap for the cart, resting it against his forehead.

“Come on Pippin. You hop into the cart and transform those shells, and I’ll get us underway. Everyone will be wondering where their apples have got to.”

They hadn’t gone far when they heard shouting from the road ahead. They rounded a corner and found the two unicorns that had gone galloping ahead stuck in muddy bog caused by a dip in the road. Fidelio was prancing around the edge of the bog and not doing anything useful.

“Help,” the unicorns cried. “We’re stuck in this sticky stuff and getting stucker. It’s all over our shiny coats and getting stuck in our silky manes.” They both whinnied and shook their heads, spraying mud all over. Fidelio gave a yelp and backed away, unwilling to get dirty.

“Now’s your chance Nobby.” Pippin jumped down from the cart and hurried to the edge of the mud.

“I’m not doing this for your silly plan Pip. I’m doing this because it is the right thing to do,” Nobby grumbled. He dropped the strap attached to the cart and with a twist of his hook unhitched it from the cart as well.

Pippin bent down to pick it up.

Pippin had been about to touch the strap with an ungloved hand. It would have turned into an apple and there would be no way to save the unicorns.

“That was lucky.” Pippin picked up the strap in her gloved hand and threw one end to the trapped unicorns. They started fighting over it.

“Stop it,” Nobby shouted at them. To his surprise they did. “One at a time or neither of you is getting out.”

Sheepishly one of the unicorns dipped its head into the strap.

“Out the way Nobmeister, this is a job for unicorn power.” Fidelio hitched the other end of the strap on his horn and began to pull. The stuck unicorn edged forward and fell back as the strap slipped off Fidelio’s horn.

Nobby and Pippin shared an amused look. Pippin took the strap and dropped it over Nobby’s hook.

Nobby began to pull. The unicorn was heavy, and it was well stuck. Nobby pulled harder. His hooves began to slip on the wet ground. He braced himself and pulled with all his might. The edges of his vision went red, stars danced in front of his eyes. He felt his horn grow suddenly very hot. In the distance a horsey shape emerged from the trees. It shone like a black diamond and swam in Nobby’s vision. It seemed to have two horns.

Nobby gasped just as the first unicorn came out of the muck with a loud sucking schlopping pop.

“Did you see that?” he gasped.

“You were amazing Nobby,” said Pippin.

“Did you… oh nevermind.” The other unicorn was straining for the strap. When he was ready Nobby pulled again. This time his hook grew hot the first time, and just before the unicorn popped out of the mud Nobby saw the strange figure in the trees again.

Both unicorns were standing with their heads bowed, covered in mud. Fidelio pranced back and trotted around them.

“Look at the state of you. It’ll take weeks to clean that off and I don’t think you’ll ever get rid of the smell.” He stopped and looked down at Nobby. “Good job Nobbo. Seems like you’re a decent sort after all. I’ll be sure to tell the others.” With that he was off, somehow avoiding the mud pool himself.

“You’re a hero now. You should go and make the most of it.”

Nobby shook his head. He couldn’t shake the image of the strange horse with two horns.

Pippin’s eyes went wide. She reached out to stroke his mane and stopped. She had been reaching with an ungloved hand. “You’ll not find much if I turn you into an apple. Speaking of apples, what about those?” She pointed to the cart.

“I think the fairies and unicorns can haul their own apples for a while.”

Find out more about my writing here.

For those who have read my adult fiction, a biographical note. These children’s stories are where I started. I was enraged by a fairy story franchise that played on the acquisitiveness of children, churning out books with regurgitated storylines I can’t describe as “plots”, and merely changing the colour or gemstone of the fairy involved. So I started making up my own for the kids, rather than buy them more of this trash (because they had to have X the Xish fairy to complete the set…)

My kids preferred my stories and so the saga began. Recently my younger daughter asked me to rehash this one for her as she has a textiles project to do at school, based on her favourite story. Since I was writing it down I thought I would share it will my beloved blog followers.

Somewhere I have about 20k words of the story of Pippin Apple, which was intended to be a novel, but life intervened.