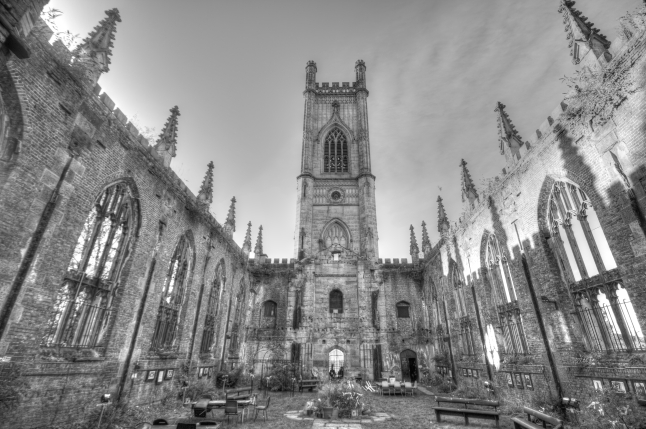 When the fishermen came in from the sea, blistered and frozen in the last squalls of the season, but desperate to replenish their fast dwindling stores, the tribal cure was broth, bowl full, warm and liquid seeping into each extremity, blessed relief for nerveless fingers, lifting drooping heads.

Thus for us the weak sun on the first cloudless Spring day, dimmed and drawn within ourselves, diminished by the ruined city’s mute oppression, we stretched our bodies out to suckle on the sustenance.
Absorbed, our senses dulled by the heady rush of strength, we did not see the ragged band of strangers who approached. Heaped in mismatched clothes despite the sudden warmth, shuffling and fearful, we only caught their vivid stench when they crept up to us and close. We stepped back in alarm, mirrored, for we had seen no other souls for months, and they had thought us statues.

Hands held out palm first to show we meant no harm, our thoughts caressed as we determined what we ought to do. Curiosity warred with caution, although which of us favoured one over the other, we could not say.
We had had no human company since we descended into the mountain. We found ourselves hungry for the mundane and commonplace. The simple joys of home and hearth, the laughter and the joys of lives lived as part of something greater and continuing. And though these seemed to be the destitute remainders of tribes long lost or gone, among their numbers there were children, greybeards, and stooping crones.

They looked at us in awe, as beings from another world, and perhaps we were, distanced from this place by time if not by space. Representatives of long forgotten Gods, touched and shaped by them into these wondrous bodies, free of want and care as long as the sun shone in the sky.

Word by halting word we learned their impoverished history; in part it filled the gaps that marred our own. They eked out a living farming plots in scattered gardens among the ruins of tall homes. Tales told by their own elders, learned from generations gone to dust, recalled a time when lofty towers rose to kiss the clouds and men flew in between in bright machines. Until propelled by greed, the insatiable drive to see desires fulfilled instantly, the world knelt at the very brink of catastrophe, and tipped over. Winds and tidal waves tore through civilisation, upending all the works of man, and the landmarks of his passing. War and famine spread until the few communities that could defend their borders closed themselves against the world outside, took the idols of their misfortunes with them, built walls around themselves and burned within.

So must have been our island home, the natural boundary, a thousand miles of sea in each direction holding off the stain of war, and then the slow forgetting of what befell the world. Our libraries fell silent with the silence beyond our borders; jungles reclaimed the stone and metal structures until they became our well-loved hills. In our time there were just the relics and hoarded precious tomes, the ones that you once studied, looking for our own escape.

And yet not all the world had fallen prey to the despair, these wretched people had disdained the Gods of avarice and seeking life in harmony with the rhythms of the earth, lived poorly but free in this abandoned shell.

We gifted them the knowledge of the older Gods, the two to whom we owed the creation of the world, and shared with them the tragedy of the God’s doomed path of love. A lesson and a warning, and an exhortation to seek out the hidden temple, resurrect the rites of worship and sustain the sleeping God.

We parted, knowing some would not believe, and some would fear these naked aliens, these bearers of a message, and a history unknown. Yet some would be inspired, would see the in their lives the mirror of the blue God of form and making, fled beneath the ocean; and the green God of growth and shaping trapped deep beneath the earth. The faint spark of belief would feed both Gods, would stir in them the strength to regain life and challenge the usurpation of their place amongst the stars. Some few might seek them out, as acolytes and adherents, to break the sullen barriers between the peoples of the world.

And we, the harbingers and instruments, perhaps the gratitude and reborn skills of growth and making, perhaps compassion for our sole regret would lead the Gods to work a further miracle and give the gift of life to us.

If you are interested in my storytelling look here